The late hour of 11:00 pm is all too familiar as I assemble 150 days of meals into 25 boxes.
END_OF_DOCUMENT_TOKEN_TO_BE_REPLACED

As I woke up in my tent this morning I remembered an important fact:  it is just 23 days before I briefly take a look at the monument which designates the southern terminus of the Continental Divide Trail in southwest New Mexico.  I was on a two-day hike along the Pacific Crest Trail near the Columbia River in southern Washington.  My good friend, hiking partner and fellow baseball fan, Tom Brown, joined me on what was a final check on the gear I will carry northbound from that sandy border within a pebble-throw from Mexico.  Since late November I have spent countless hours updating spreadsheets, ordering gear, purchasing food, drying food, and shopping for even more gear…and you get the idea.  Also in late November I developed plantar fasciitis in my right foot.  Well, you know, this is not the type of injury you want while contemplating a 2,800 mile hike! 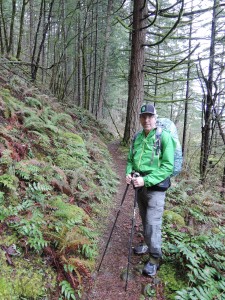 I previously limited my training to short hikes along local forest trail in Portland.  But with a little more than three weeks before the real hike begins, I called Tom and asked if he would join me for a shakedown hike.  It was imperative to set up and sleep inside the Six Moon Designs Skyscape tent for the first time.  I also needed to learn a new water filter, the Sawyer Squeeze.  There were numerous other things to check out:  the base layer my lovely wife, Cindy, gave me recently as a gift, rain pants (which came in handy during the wet spring weather), the ASICS trail runner shoes (with the orthotics my podiatrist prescribed in December), and numerous other little things.  As the departure date for the CDT approaches, I am determined to make sure everything is ready, including me!

The hike to a tiny streamside campsite just five miles from the Bonneville Trailhead was easy in the light drizzling rain.  I love the fern-lined trail along this stretch of the PCT National Scenic Trail.  My injured foot felt great in the new shoes.  And the Gossamer Gear backpack I won in a raffle at the ALDHA-West Gathering last October felt great!  So far, so good!

Upon arrival at camp I immediately worked on the tent.  It weights just one pound, and requires the two hiking poles I use on all my hikes these days.  This type of tent requires small adjustments to the poles and 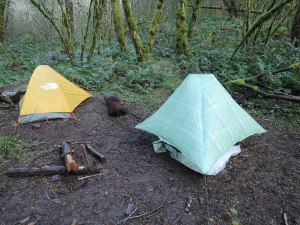 Right: Six Moon Designs Skyscape tent I will use on the CDT. Left: Tom’s tent.

guy lines to get the tent to safely hold tight in wind and rain.  After a few minutes of trial and error I got it right.  Tom and I realized it was still early enough to get more miles in, and we hiked along a nearby trail that many decades ago was used as a logging road.  The road traversed the southern flank of Table Mountain, an easy, gentle climb for about 30 minutes before we turned back to camp.  At that point in the afternoon I had hiked seven miles, but I wanted more.  During my first days in New Mexico I will likely hike 15 to 20 miles.  After stopping to put on rain pants during a light sprinkle, I noticed the pack cover that I had previously attached to the backpack had gone missing.  I thought, “where did I lose it?  Not far, I hope.”

I retraced the steps that Tom and I made on the easy traverse below Table Mountain.   After about 25 minutes of steady walking my eyes locked in on the light-green cuben-fiber pack cover that I never want to lose again!  I wrote another item on my to-do list: “make leash for pack cover”.  The total miles for the day added up to 11.  Better yet, I declared myself plantar fascittis free! 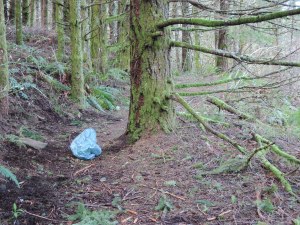 Note to self: don’t let gear fall of the backpack on the CDT!

Back at camp it was supper time.  I fired up an alcohol stove that I was still learning how to use, a product of Trail Designs that uses a titanium windscreen engineered to tightly fit around the specific titanium cook pot I use.  Modern materials such as titanium and cuben fiber have facilitated a race to ultra-light pack weights for long distance hikers.  I am certainly a participant, but happy to recall the days of carrying my own version of “monster” in 1991, when the pack-weight for that 1,000 mile section hike on the PCT was around 60 pounds.  Dinner was great!  But the best part was the honored guest Tom and I had while we had hot drinks in the damp, chilly campsite along a crystal-clear stream.  A beaver had swam downstream and stopped just twelve feet from the log/stool I sat on while drinking hot cocoa. 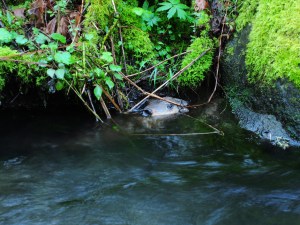 This beaver stopped at our stream-side camp after dinner.

Perhaps the beaver stopped to avoid being seen by us, or maybe she was just curious and hoped we would toss a peanut or something.  Tom and I watched the flat-tailed visitor for several minutes before she continued downstream to, perhaps, the pond we had seen earlier in the day along the same stream.  Both Tom and I were amazed at this little encounter with the furry resident of the forest!

The long sleep in the peaceful forest along the PCT was just what I needed after many late nights at home assembling the 25 supply boxes Cindy will mail to me as I walk the divide in New Mexico, Colorado, Wyoming, Idaho and Montana.  The dry, warm, comfortable night in my tent was a good sign…in just 23 days I will sleep under a very big sky in southern New Mexico for the first time.  I am optimistic for the adventure that awaits there!

Thanks to Tom Brown for joining me on the hike and his insights on many topics such as gravity feed water filters! 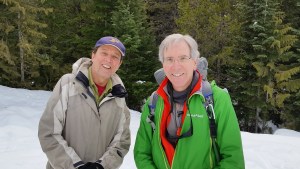 Tom Brown and Roger Carpenter on a snow hike and camp, February 6, 2016.

It’s time to let all my friends and family know:  I will start a thru-hike of the Continental Divide Trail on April 18!  I made the decision in late November…but you never know.  Plans can change if/when other opportunities are presented and somehow convince me to take a different direction.  I kept the possibility of hiking the CDT within a pretty small circle. 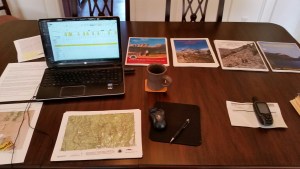 It was clear, by late-December 2015, that hiking the entire CDT was the right thing for me to do!  When the hundreds of pages of CDT maps arrived at home, it felt like a certainty that I would walk the trail drawn on the hundreds of pages of topo-maps.  Hiking north from southern New Mexico through Glacier National Park in Montana is the right direction for me in 2016!

I invite you to follow my blog at www.elkpass.com.  You can register to be notified by e-mail when I have news about the journey, before I depart from the Mexico border and while I am really walking!